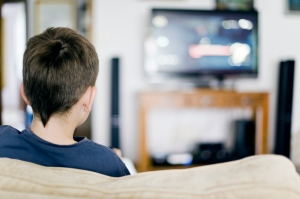 Surely, it’s unfair nowadays to proclaim the television as the idiot box? While the television has been the backbone of family life for the last 60-plus years, so many people view it as the epitome of idiocy. But, for a lot of families, if it wasn’t for the television, they wouldn’t bond at all. In fact, think about your own experiences growing up. The television was there, and it was, usually on in the background. Now, not to say that television is amazing for us in every sense, but now, with the internet, and the various ways we consume information now, the television could be the one and only way that we can spend time together as a family. Some of the latest cable tv statistics would have a lot to say in this regard. So, we need to make the most of this box in the corner of a living room. But if you have concerns that it is making you and your family stupid, what can you do to ensure that the TV helps you cement quality family time, but without destroying brain cells?

Altering Your Own Viewing Habits

It’s a delicate balance to get right when we are TV addicts ourselves. We know that there is a lot of bad quality television out there, and if we are guilty of watching hour after hour of reality TV, we don’t want to pass these habits on to our children. So, when we think about what our kids start to watch at a young age in terms of their own habits, the best indicator of what your children will watch is actually what you watch. As a parent, if you don’t watch anything educational, and you are setting this example of television habits, your children will grow up accepting that this is the norm. So, it’s an age-old expression, but practice what you preach. When our children are young, they are so impressionable, that they will watch what we watch, and these habits will become embedded in their life. So if you are guilty of watching Keeping Up With The Kardashians, talk shows, and similar content, maybe it’s best to keep this firmly under wraps. When you are watching television as a family, go for good quality content. While there are numerous family shows out there, are many of them educational? If your children are young enough, sitting down with them and watching shows they like, but you know has an undercurrent of education, is a great way to get your kids hooked onto good stuff. CommonSenseMedia.org has a list of educational TV shows to get you started. But as our children grow up emulating us in one way or another, if you want to make sure that your children are using the TV for good, then you have to alter your viewing habits drastically. This means having the History Channel on in the background or going for family quiz shows to encourage a bit of friendly competition in the living room.

One of the biggest positives of watching TV is the fact that it can increase your emotional intelligence. While most people consider television to be something that rots your brain, if you watch TV in an active sense, rather than a passive one, you will develop this emotional intelligence, where you begin to develop your own self-awareness, as well as awareness of other people. Emotional intelligence is one of the biggest indicators of demonstrating empathy and observation. It’s unfair to say that television is very selfish activity because when you watch good quality shows, you can become actively involved in something that you wouldn’t normally do in real life, because television shows these heightened scenarios that we seldom come across. While there are numerous shows out there that are realistic, by exercising our ability to think laterally, and from other perspectives, we can begin to differentiate between right and wrong. This is important for children at a young age. We are all impressionable when we’re young, and we grow up, for the most part, understanding what is right and what is wrong, but it’s not as simple as this. Of course, there are numerous shows out there that blur the lines and highlight moral dilemmas, and this can help to instigate interesting debates in the family household. Cable TV is one of the biggest purveyors of high-quality drama, that shows complex characters, where they are doing something wrong in a literal sense, but they are wrestling internally with themselves. Classic shows like The Sopranos or Breaking Bad were mainstays of cable TV but dealt with moral implications in an intelligent manner. Cable TV is full of drama of this ilk, and you can go on Optimum.com to learn more about the various cable TV channels and premium packages if you are interested in going down this avenue. But also, it’s important not to underestimate the news as a way to instigate debate with your children. Be sensible, because the news can throw up topics that you don’t want to discuss with your children because they’re too young, but, the point is, as far as instigating debate and looking at things from other perspectives is concerned, television is a very good tool!

Connecting With Your Children

Because we watch TV on many different devices now, that actual quality time with people are sat as a family in front of the TV seems to be non-existent. This is why we can use television to connect with our children, not just in terms of being sat in the same room at the same time, but we can use television as a way to communicate with each other. Your children like a certain show, so it gives you the opportunity to sit down with them to watch it and to talk about it. When your children are toddlers, there are going to be many kids TV shows that they love, and by sitting down with them, and watching these shows, no matter how much they numb your brain, the children are going to be grateful to you. When we are raising our kids, it’s so easy for us to not be present in the moment, because we either sat on our phones while the kids are watching TV, or we just got too many things to do, but if you take that opportunity to sit down on the floor, cross-legged, with your child, watching their favorite show, you will feel much closer to your child. And as they get older, you can use their favorite TV shows as a way to make quality family time together. You can sit down, at the same time every week. But now, because of the fact that we can watch what we want when we want, that means you don’t have to sacrifice other aspects of your life. If you can make a date to sit down at least once a week, to watch their favorite TV show, and to have a discussion about it afterward, this is a very simple way for you to bond. But you have to show willing; it’s not good enough to just be sat there next to them. As parents, we can easily pay lip service to the idea of quality time, just by being sat next to them. But if we get out our phones, there is no sense of engagement, and while you can argue that sitting together in silence watching the TV is just as bad, at least you are both sharing a common activity.

Can The TV Say Something That You Can’t?

We can struggle to verbalize how we feel now and again especially when it comes to matters of the heart. This is where television can do a lot for us. Have you ever sat with a parent or loved one, and saw a tender moment on the TV and it really hit close to home? You might have felt a moment between the two of you at that point, but you didn’t say a word. TV can help us to say what we’re really thinking, not just in terms of emotions, but in terms of what you might want for your children as they get older. For example, if you want your children to have confidence and belief in their abilities, the words that come out of your mouth may seem forced or a bit noncommittal. But by using a TV show as an example to back up your statement of intent, that little box in the corner of the room can fill some of the gaps in your parenting skills.

A lot of people put their kids in front of the TV as a way to distract them and placate them. But, as a family unit, we can use the TV to advantage, whether it’s to educational shows, or by helping our kids to differentiate between good and bad, but also to spend quality time with them bonding over certain shows. It seems that now as we can go and watch movies on our devices, this idea of a solidified family unit is non-existent. This is why the TV should take pride of place in the corner of your living room because it can do so much for every member of your family. The idiot box? Hardly.