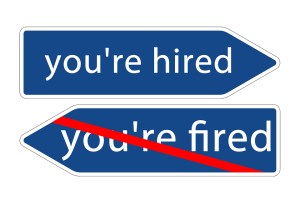 You’re in a tough position. You’re a small business as it is, and you can’t afford to hire much staff to help you out. But, now you’ve found yourself in a situation where you think you’ve hired the wrong person. Is there any hope? Have you really put the wrong person in the wrong role? It’s time to find out.

This is something you’ll hopefully have worked out before the person was hired. You never want to be in a position where someone is seeking preferential treatment. If they tell you that they “can’t come in on Friday” because of a pre-arranged appointment, why is that? Why was this not mentioned during the interview process? Ultimately, if you find that scheduling issues are becoming too regular, you might both need to part ways.

Alright, so we’re fairly expectant that some employees might grow tired of the company after a long period there. It’s OK for the odd complaint to be bounced around by veterans of the company. It can even be beneficial for us! But, if you’ve got a new hire that’s complaining after weeks of service, it’s a big warning sign. It’s only going to get worse from here, so you’ll need to put a stop to it quickly before it elevates further.

When you get a new hire that won’t stop talking about how things worked at their old job, you need be wary. Ultimately, they’re not working at their old job anymore. They need to get their fascination with it out of their minds because things work differently at your place! An inability to adapt signifies an unwillingness to do things a different way. When this becomes an issue, you might find that they bring the rest of the team’s morale down in the process.

Not A Team Player

You’re running a start up business, and that means you’ve probably got a small team of loyal employees. If just one of those employees causes a problem to the team morale, you’re in huge trouble. It can bring the entire productivity of your business crashing to the ground, causing irreparable damage in some cases. It’s imperative that you bring someone into the company that can act as a team player. If you’re unable to do this, don’t be surprised when your current staff gets frustrated and disillusioned.

Every job has a learning curve, and you expect new hires to struggle for a while after they’ve been employed. There comes a time when this needs to stop, however, and this is where you need to be careful. If an employee is making the same mistakes over and over, it’s a cause for concern. It might show that you’ve hired the wrong person for the wrong role, or it might just be a training issue. Figure this out quickly, as you need to solve the problem before it gets worse.

Have you hired the wrong person? Hopefully, you don’t need to resort to showing them the door just yet.